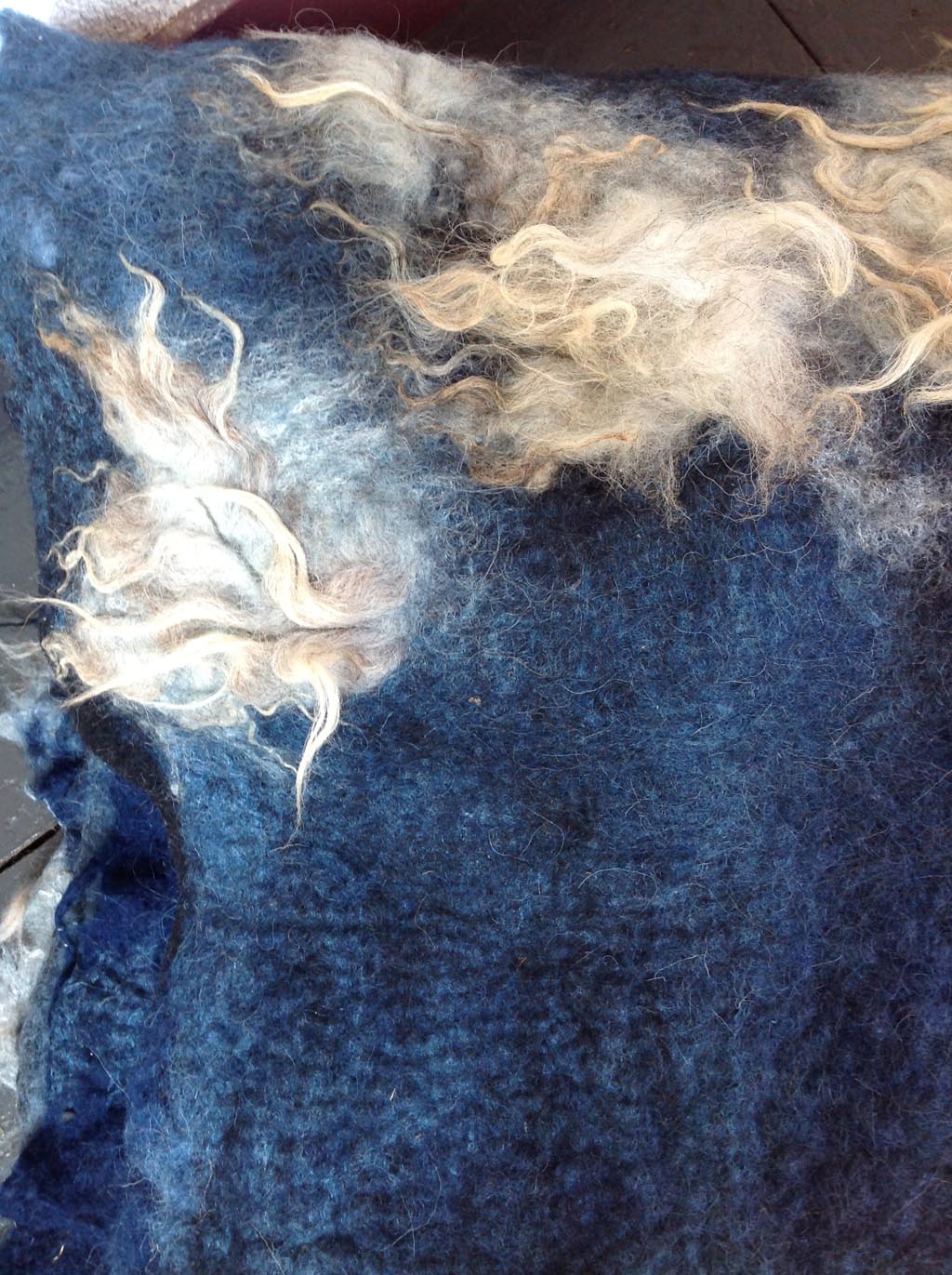 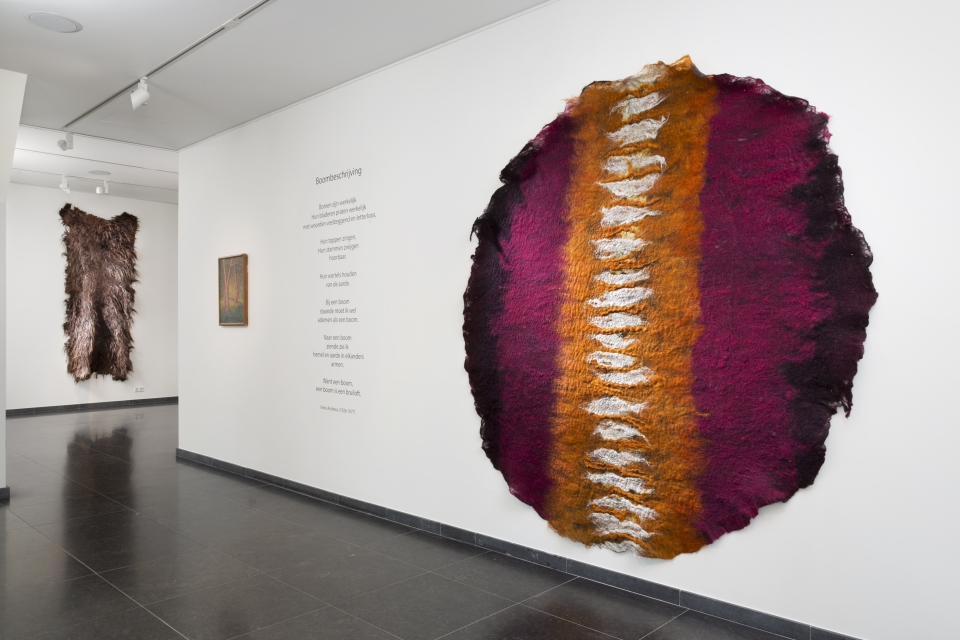 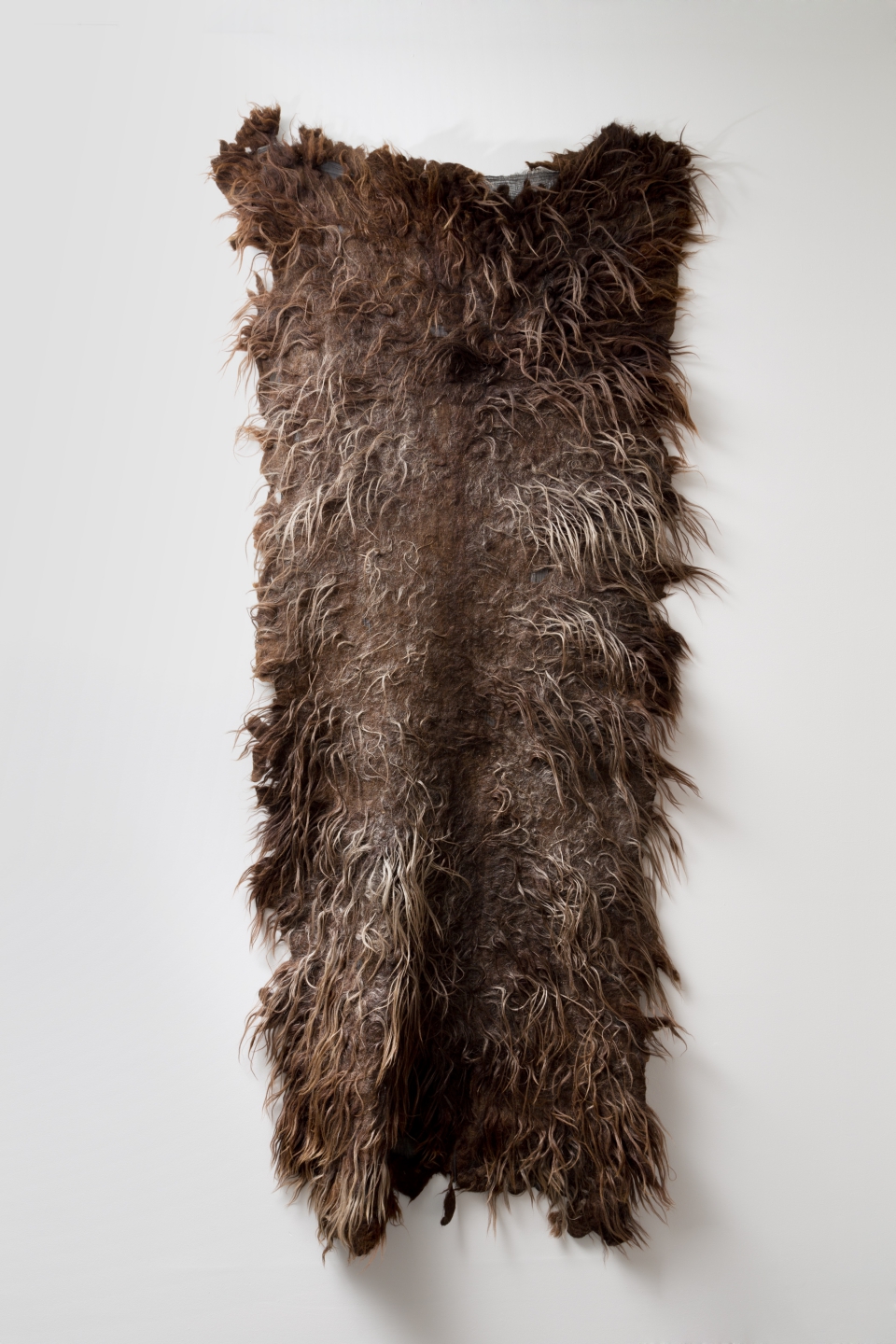 For the exhibition ‘Wedding’, Claudy Jongstra has taken inspiration from two early pioneers in Expressionism and the overall approach to art and life: Jacoba van Heemskerck and Marie Tak van Poortvliet. Van Heemskerck worked in Domburg during the early twentieth century and was part of the artists’ colony which also included Jan Toorop and Piet Mondriaan. For that time, the paintings that she produced were very expressive. In Domburg Marie Tak van Poortvliet established the famous exhibition building (today’s Marie Tak Museum) and was among the first in Europe to experiment with biodynamic agriculture. The company founded by her, Loverendale, exists to this day. The exhibition ‘Wedding’ offers a glimpse of the ideas shared by these progressive pioneers.

Hanging in the back space of De Ketelfactory is the preparatory sketch in wool, titled ‘Geel’ (Yellow), which Claudy produced four years ago in connection with a wall installation at the Fries Museum. Sunny and active, it evokes an image of sunlight on a field of wheat. All sorts of yellow hues, obtained from dye of the weld plant, alternate with each other. Horizontal bands of raw wool and finer treatments of it meander through the work. The work ‘Waves’ (carried out in indigo) shows her refined mastery of the technique for which she has had an unerring instinct over the past twenty years. Her work displays a high quality in terms of its stratification, subtlety, rhythmic quality and line.

The exhibition was opened by Guus Beumer, director of Het Nieuwe Instituut in Rotterdam.

Claudy Jongstra designs tapestries and monumental installations of textile art. In creating her unique and tactile pieces, she collaborates with architects and clients throughout the world. Claudy Jongstra and her team maintain control over the entire process, from the raw materials to the final result. She is dedicated to the creative process, and part of this involves the breeding of her own sheep, keeping bees, cultivating a botanical garden and growing plants for the dyes.

In 2011 Jongstra exhibited her works at the United Nations headquarters in New York and, in 2012, at the World Economic Forum in Davos. She has been awarded The Prins Bernard Cultuurfonds Prize for Applied Art and Architecture, and has recently received two other Dutch prizes for sustainability.

Segments of the speech by Guus Beumer given at the opening:
“The specificity and complexity of the issue ‘innovation’ always plays a significant role in our encounters. For Claudy, innovation lies with a new yet artisanal notion of felt. Over the past decades she has developed a new methodology in order to deal with that issue. In her work felt suddenly becomes expressive, fibrous, open and stratified. That’s not a result of her being lazy, not because she decided that what her predecessors did should mainly be reproduced, but because she wants to question every aspect of the felt technique. […] Quite singularly Claudy has served as a prelude, for twenty years in fact, to something that nowadays is suddenly regarded as a kind of trendy movement: the return to a ‘craft’ culture, the actual shape of which is yet undetermined. I believe that such an avant-garde stance actually holds great interest for someone who adopts an artisanal position. It looks as though we’re all going to be producers again. The interesting thing is that Claudy literally thinks ‘from the ground up’ with respect to the overall production process, which contains all the ingredients for what ultimately yields an aesthetic experience.”

distillation ‘Wedding between heaven and earth’

Peter Gertenbach cooks, Tollius-style
Peter Gertenbach and Caroline van der Vlies run the culinary show at Restaurant Tollius in Amersfoort. The restaurant uses fresh, organic ingredients and the dishes change with the market offer. The cooks find inspiration in their environment, when traveling, in books and mostly by following their own tastebuds. In the monumental station Amersfoort Central, they opened ‘Perron 4/5’, which serves Italian dishes, also based on organic ingredients. Peter Gertenbach cooks exclusively for the distillation participants.

Jacqueline van Paaschen on Claudy Jongstra and ‘Wedding between heaven and earth’
“Is there something by which we can discover how the thread is handed on from artist to artist in the course of ages and which image presents itself?” Marie Tak van Poortvliet wonders around 1915. A century later, Claudy Jongstra unwittingly continues her train of thought. “Her love and joy for the relationship with the earth and her devotion to the processes of ancient craft, in which so much knowledge is hidden, give her insight into the cosmic lawfulness of nature.” So writes art historic Jacqueline van Paaschen about Jongstra. “Her alchemist search is ‘down to earth’, whilst simultaneously revealing a world behind the one we can perceive. Creating culture from nature, using pleasure, time and devotion as primary means.”
Jacqueline van Paaschen speaks about the fascination Claudy Jongstra, Jacoba van Heemskerck and Marie Tak van Poortvliet share for nature and environmental awareness.

Claudy Jongstra’s work invites you to touch it. Graphic designer Berry van Gerwen has made this tangible in the publication. Art historic Jacqueline van Paaschen wrote a text on the connections between Jacoba van Heemskerck, Marie Tak van Poortvliet and Claudy Jongstra. Included in the booklet is Kim Everdine Zeegers’ video portrait of Claudy Jongstra.

From the text by Jacqueline van Paaschen: “It appears that Claudy is following in Jacoba’s footsteps. She, too, explores ancient plants, such as madder and weld, which were well-used in textile works in the past. Now, they have been replaced by chemical dyes, much easier to produce. It takes five years for the roots of the madder to be processed, after drying. The mashing used to occur by candle light, so as not to allow the daylight to affect the powder’s warm reddish brown shade. The dyes for the radiant yellow produced by weld are mainly in the tips of the sprouts and the seeds. In the old days, weld was boiled in water mixed with urine to favour the extraction of the dyes.”
The publication was released in Dutch and English.
order