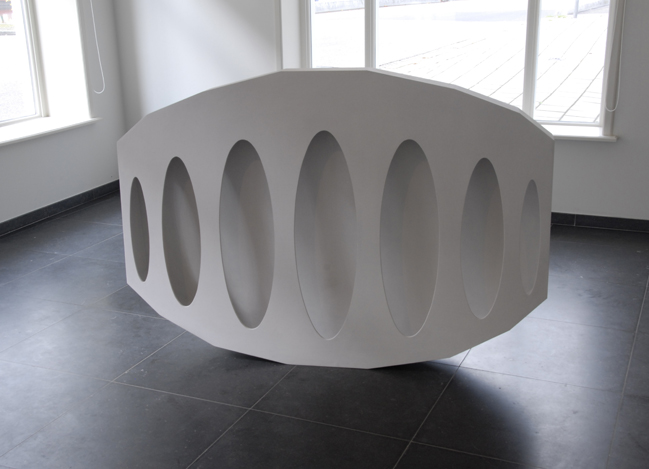 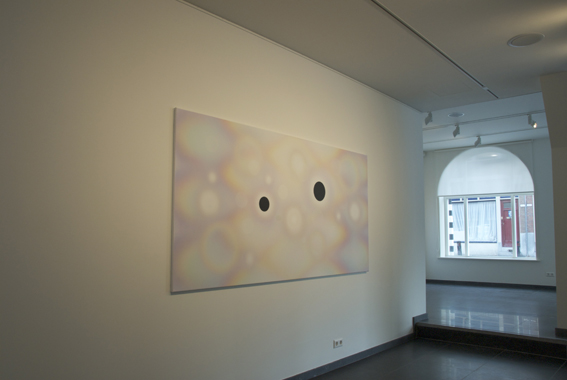 Karin van Pinxteren is the pivot within the exhibition ‘Encounter #2’, for which she invited Henk Olijve (edition 1) and Roland Schimmel (edition 2). During the preparatory phase they began an intensive dialogue, resulting in a dynamic exhibition of shifting encounters and fluctuations. The action and the spatial existence dictate the exhibition space for a period of two months.

In her work Karin van Pinxteren  investigates the physical oppositions between ‘proximity’ and ‘distance’, as well as the psychological field of tension between ‘approach’ and ‘detachment’. In this she employs a range of disciplines. Van Pinxteren’s performances, for example, revolve around a woman who plays a ceremonial role. Her two- and three-dimensional work often takes the shape of large installations, such as the ‘Existential Interiors’ which provide impressions of the spaces in which they are shown. Her work is a sequence of notes on the known and the unknown, on attempts to communicate and articulate questions about art.

At De Ketelfactory Henk Olijve is producing a mural that he will change and expand on every week with new elements. He wishes to keep on providing the viewer with new stimuli. The work will generate more questions than it answers. In his paintings identical characters (both of them being Olijve himself) carry out a specific act in a concentrated manner. Although the act does not seem to take place at fixed intervals, it does continue and become cyclical. The situation in which the characters find themselves is a central focus.

On January 4th, 2008, a major fire destroyed a number of studios in De Nederlandsche Cacaofabriek. Henk Olijve and Bert Loerakker’s studios were amongst those reduced to ashes. We talk to both artists about this dramatic event in a ‘talk show’, hosted by Margaretha Louwers. Besides this, Bert Loerakker was at the cradle of Henk Olijve’s artistry, providing plenty of food for conversation.

After the talk show, Philip Akkerman will take the stage. He will elaborate on his vision of the self-image, accompanied by a slide show.

Finally, the subject of ‘music and the transience of things’ will play an important role. Music is yet another factor that connects Henk and Bert. The day ends with a simple meal provided by Bert and Henk.

‘Encounter #2, edition 1’ is accompanied by two publications, ‘Karin van Pinxteren’ and ‘Henk Olijve’ (in Dutch). From the opening words by Winnie Teschmacher:

About Karin van Pinxteren: “De Ketelfactory has been transformed into a spacious podium, governed by connection and seclusion, Van Pinxteren’s themes. This total artist’s passion has shone through in the collaboration towards a fascinating Distillation. You will find the echoes of the roads travelled in this publication.”
order

About Henk Olijve: “In Henk Olijve’s work, the artist himself plays the lead role. The painted scenes appear to tell a story, but attempting to unravel it will leave the viewer with many questions. During the creation of the wall painting there was always an “extra” Henk, temporarily part of the scene on the wall. The wall is white once more, the images recorded in this publication.”
order